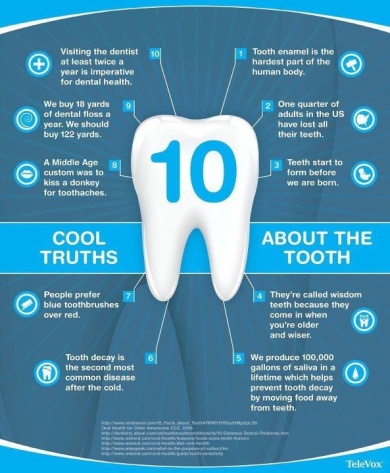 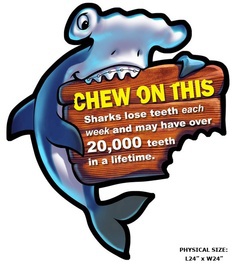 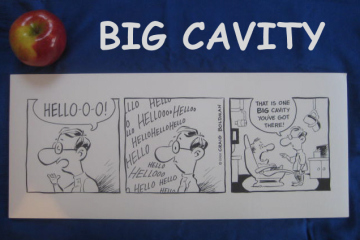 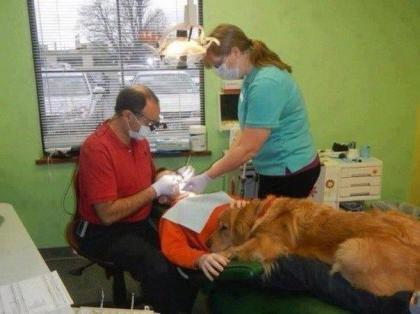 At Smiles, we do our best to ensure your dental appointment is as comfortable as possible! 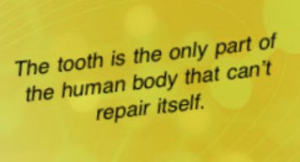 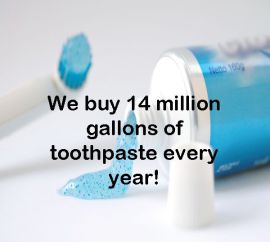 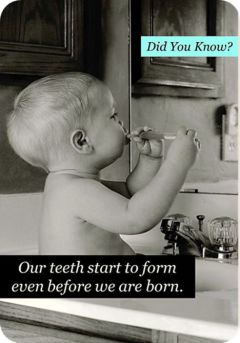 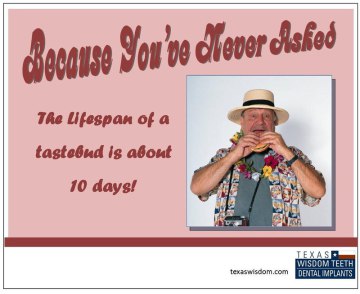 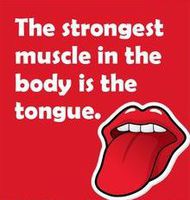 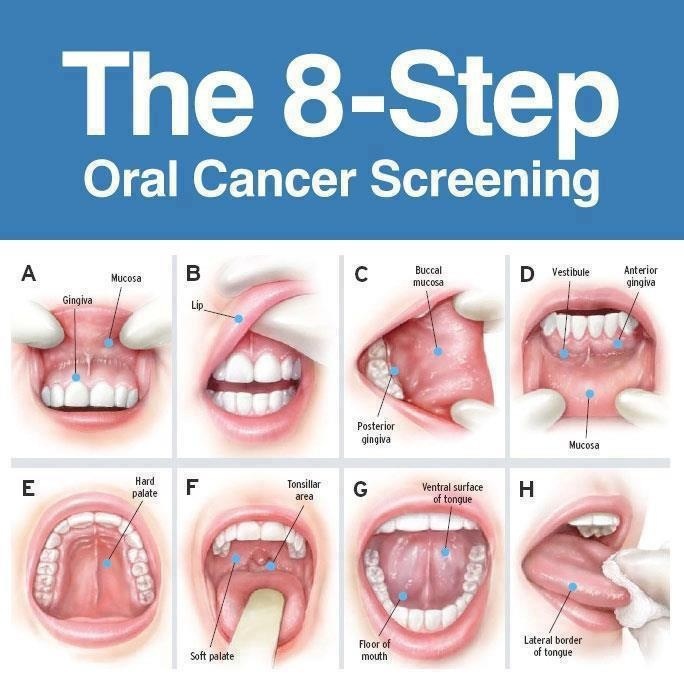 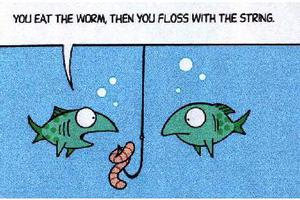 Whoever said dentists don't have a sense of humour?! 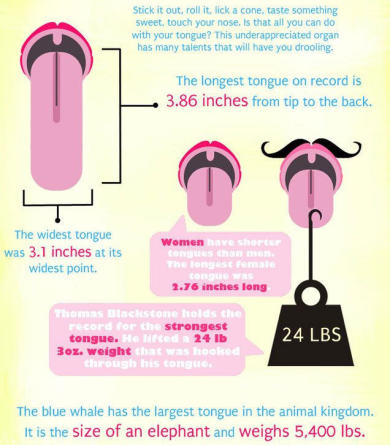 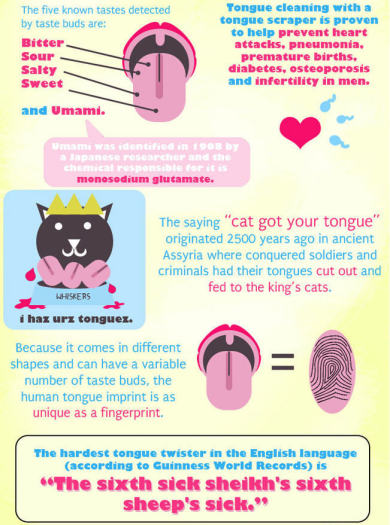 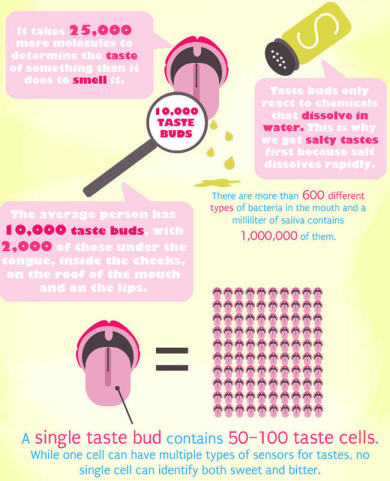 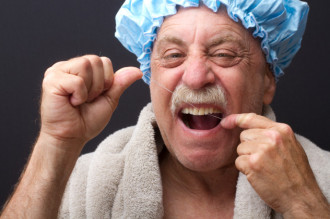 Many people assume you should brush your teeth right after eating, as that is when you have the most buildup on your teeth. However, it’s also when you have the highest amount of acid in your saliva, which, when combined with the abrasions of brushing, can actually assist in wearing away the enamel of your teeth. One dentist suggests rinsing your mouth out with water after eating to restore the pH balance and then brush about a half hour later.

Dentists also insist that no matter how well we brush, if we aren’t flossing we aren’t doing it right. Unfortunately, many people rarely floss, but it is actually even more important than brushing. It gets food that’s caught between the teeth that you can’t get with a brush, and protects your gums much more effectively. When asked whether you really have to floss your teeth, most dentists will reply “Only the ones you want to keep.” 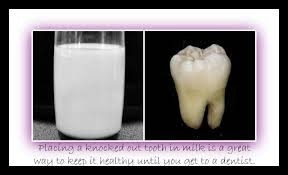 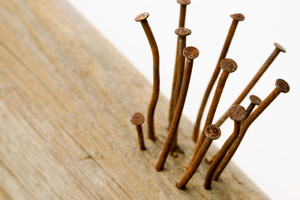 A toothache is an abominable experience to endure. Sometimes the pain gets so bad we will try anything to make it stop. Our ancestors were no different, but they didn’t have quite the dental knowledge we have today. So, as you might imagine, they came up with many creative ways to stop a toothache. Most of their methods had no more effect than a placebo can provide.

Some people believed that toothaches were caused by tiny worms that got in your teeth, and that you could remove them using complicated methods with seeds and wax. Another method involved saying a bunch of magic words and then exchanging bodily fluids with a frog in the form of saliva, which is about the most disgusting thing imaginable. One medical practitioner long ago suggested that someone irritate the hell out of the affected area with a nail and then, once it was all bloody, jam the nail into a wooden beam. He insisted this would work and that the “treated” tooth would never bother you again. 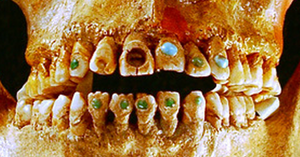 The Mayans were an advanced civilization who regrettably are now most known for their supposed “prediction” of the end of the world. About 2,500 years ago, the Maya already had a very advanced understanding of teeth. While many people today try to whiten their teeth, for the Mayans that was not nearly enough. They would have their dentists use a primitive drill to decorate their teeth. Sometimes they would have parts of the tooth cut out or shaped to make it look more interesting. However, their most extreme modification was the bejeweling of teeth.

Some people, more often men, would have small holes made in their teeth that were fitted with gemstones  to make their mouths look pretty. Researchers believe these finds show the Mayans were very skilled at dental work, as they could fit these jewels into the teeth without breaking them. 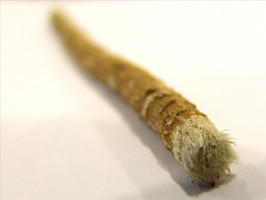 While we haven’t always had the fancy electrified gizmos of today, our species has been trying to keep our teeth nice and clean for quite a long time. Evidence has been found that as far back as Ancient Egypt people were using primitive tools made from twigs to brush their teeth. Many countries still use twigs from trees with antibacterial properties, such as cinnamon and neem, and they have been found to be just as effective as modern toothbrushes.

The first object closer to an actual toothbrush was invented by the Chinese. The handle was made of bamboo and it had boar bristles for cleaning teeth. As for toothpaste, it’s been a long journey to the minty fresh chemical concoctions that we slather over our pearly whites today. When pastes for the purpose of tooth cleaning were first being invented, the ingredients were nothing short of nasty. People would use mixtures comprised of ash, burnt eggshells, crushed bones and all manner of gross stuff that you don’t want in your mouth. And you thought brushing your teeth nowadays was a chore! 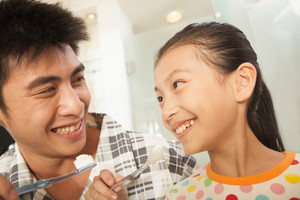 China, a rapidly industrializing nation with a massive population, faces the daunting challenge of making sure their 1.35 billion citizens are doing okay in terms of health and wellness. While most people take care of their bodies overall health, many put off any healthcare involving their teeth, due to fear of dentists, expense, and the fact that dental problems often take a long time to become truly unbearable. Cavities lead to infections that can eventually be life threatening, so proper oral hygiene is more than just a cosmetic issue.

To increase awareness of the importance of dental care, the Chinese government designated September 20 as national “Love Your Teeth Day.” This day involves promotions from dentists to attract clients, as well as information meant to encourage people to see a dentist and take better care to avoid cavities in the future. The campaign has been running for decades and has been successful in getting more people to the dentist. 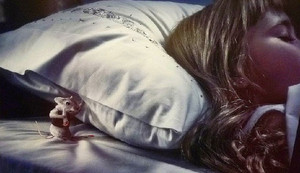 In many parts of the world, when a child loses a tooth, the Tooth Fairy comes to collect it and leaves money in its place. However, in Hispanic countries they have a different tradition.

It all started in 1894 in Spain when the king’s little son lost his first tooth. The king, wishing to mark this special event, had a priest named Luis Coloma write a story for the kid about losing his tooth. The priest created the character “Ratoncito Perez,” also known as Perez the Mouse. The story was incredibly successful and is still beloved by Hispanic children.

Interestingly, while many Hispanic countries use a similar mouse, his methods vary. For instance, the children in Argentina don’t put their teeth under their pillow, but in a glass of water. Apparently the little critter gets thirsty and these considerate children are putting a drink out for him. And in several countries he is known as the “magic mouse” instead of simply Perez. 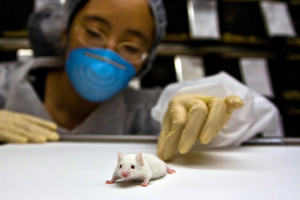 Researchers in China have been trying to grow synthetic teeth using stem cells, but as getting a hold of stem cells can be quite difficult, they came up with a (disgusting) solution: extracting them from human urine.
As these kinds of experiments cannot be legally performed on humans, they attempted to grow their tooth inside the mouth of a mouse.

The results showed some dental pulp and the beginnings of ename, but some experts are skeptical. While the method does look to be a good step toward learning how to create fully working synthetic teeth, there are still some issues. For starters, urine isn’t a very good place to take stem cells from and may lead to a higher rate of contamination issues. And growing the teeth is only the first step. Once scientists figure that out, they still need to learn how to make your mouth fully accept the new teeth you’re putting in it. 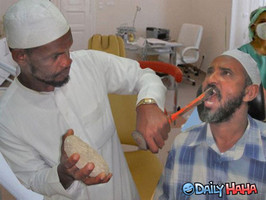 Back before modern dental science, people still had problems with their teeth, but oftentimes there wasn’t anything approaching an actual dentist around. In the early 1800’s there wasn’t even such a thing as a specific dental profession, and there certainly wasn’t anything in the way of licensing. What this meant is that many people only went to the dentist if they had a toothache and extractions were common.

Because dentists didn’t exist yet, the job fell to those who had the appropriate tools. For this reason, blacksmiths and barbers performed the majority of dental work. Of course, as time went on and the dental profession truly began, actual dentists became irritated at barbers and others who continued to practice without serious training, and now full licensing requirements mean you can no longer go to the village blacksmith to get your tooth pulled.

In the middle ages, people believed that dog’s teeth boiled in wine made an excellent mouth rinse for tooth decay prevention. 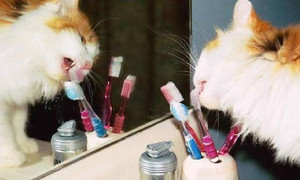 You’ve probably heard the story about toothbrushes and toilets. The theory goes that even if it is several feet away, airborne germs from a toilet flush will infect your toothbrush with fecal bacteria. It sounds pretty scary, and many people now make sure to close the cover of their toilet before they flush.

The problem is that this attitude causes people to miss the real source of worrisome germs—the brush itself. Studies have found that your toilet is one of the cleaner parts of your house, but as your toothbrush spends a lot of time removing bacteria, it ends up coated with it. Now if you have a strong immune system you should be fine, but keeping your toothbrush away from the toilet is not an effective way to keep it hygienic. What the bacteria on your toothbrush really need in order to thrive is moisture.

So if you really want to avoid germs on your toothbrush, the best thing you can do is keep it dry. 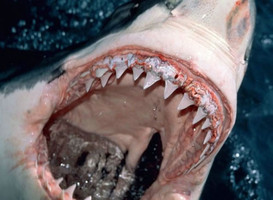 New teeth are constantly being formed in rows in a shark’s jaw. Shark’s teeth are normally replaced every eight days.

The rats front teeth are constantly growing all through its life, this is the reason they bite into everything they see to get rid of the itching sensation due to growth of teeth.

40%-50% of children will be affected by tooth decay before they reach 5 years of age.

People who drink 3 or more glasses of fizzy drinks each day have 62% more tooth decay, fillings and tooth loss than others.  Put down the pop and sports drinks and pick up some fresh water instead!

Cows do not have upper front teeth and their lower bottom ones never  stop growing.

Before toothbrushes were invented people used twigs to brush their teeth. (twigs were used in India as they have high Bactericidal property, Charcoal is also used in some rural areas)

Aadvark teeth have no enamel coating and are worn away and regrown continuously.

In the 18th century people would sell their teeth to the rich people, who then used them to make false (so replacement of teeth was seen from as early as 18th century).

In early 1600 Japanese women made their teeth black to show loyalty to their husbands.

The most valuable tooth was that of Sir Issac Newton purchased by a Businessman for $4560, which he had set into a ring.

A couple of hundred years ago bad teeth were considered to be a rich man’s disease. It was only the rich who could afford to eat sweet things like Queen Elizabeth I, who had very bad teeth. 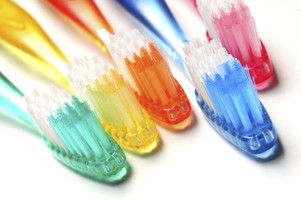 In 1994, a prison inmate in West Virginia braided dental floss into a rope, scaled the wall and escaped. (We suggest that you use floss to clean between your teeth instead of climbing prison walls! If you don’t you are missing around 35% of your teeth’s surfaces.)

You should replace your toothbrush at least every three months, and always after you have an episode of flu, cold or other viral infections. Notorious bacteria can implant themselves on the toothbrush bristles leading to re-infection.

Tooth enamel is the hardest substance in the human body. However, we do not recommend that you use your pearly whites to open bottle caps!

The first toothbrush with bristles was manufactured in China in 1498.  Bristles from hogs, horses and badgers were used.

Over three out of four people in the UK suffer from some form of gum disease. It is the leading cause of tooth loss in people over age 35. The good news is, in most cases gum disease can be prevented or controlled!

The average human produces 25,000 quarts of saliva in a lifetime. That is enough spit to fill 2 swimming pools.

Newborn babies do not have tooth decay bacteria.

9am - 5pm or by appointment

If you have a problem outside our opening hours, please contact us or see the emergency plan.

Go online now to find out more about our services.